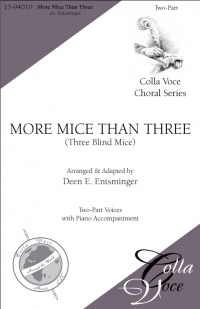 This setting of the familiar folk song “Three Blind Mice” was written to reimagine it as a more tender story of mice than the one found in the original, somewhat disturbing, text.  I was also intrigued with the idea of adapting the melody and meter to better depict the energetic and carefree nature of the creatures being celebrated in the new story.

This composition is written for two-part treble voices but can be sung in unison if, when the parts divide, the singers take the higher note.  It may also be sung by mixed voices with Sopranos and Tenors on the higher part; Altos and Basses on the lower part.

(The first audio sample is with Mixed voices, the second is with Treble voices only.)