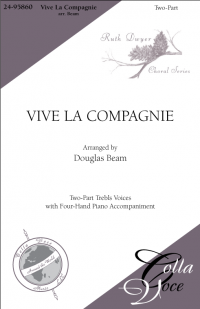 “Vive La Compagnie” is a very popular folk tune and has many variations from around the world. Scouts adopted it as one of their tunes under “Vive l’Amour”. It dates to 1818 in England’s Traditional Ballads Index. Irish singers adopted the tune for political use in the 19th century (“Ireland Blocks The Way”) and Confederate soldiers adopted it during America’s Civil War as “Chivalrous C.S.A.” (1861). The Lester S. Levy Collection of Sheet Music has the first American publication dating from 1844.  Stephen Foster arranged it in 1844.