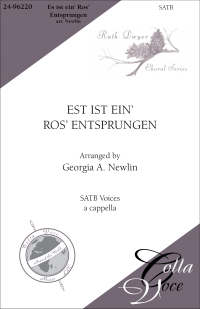 Sources indicate that this Advent hymn might date back to the 14th century.  It was published in 1582 in Gebetbuchlien des Frater Conradus with 19 stanzas and again appeared in Speierisches Gesangbuch in 1599 with 23 verses.  These early texts elaborate the late Medieval analogy between a spotless rose and the Virgin Mary, most blessed of all women.

The 1609 harmonization by Michael Praetorius (1571-1621) that appeared in his sixteen-volume collection Musae Sioniae (Zion’s Music) is probably the version most often heard today.  Indeed, the two measures of the penultimate cadence in this arrangement are based on his music.  However, the 1615 setting by Melchior Vulpius (1570-1615) is so hauntingly beautiful it is used as the basis for this arrangement.  Vulpius, a Kantor and teacher at the Latin school in Weimar, wrote and published church music throughout his life.  A prolific composer, he penned nearly 200 motets and 400 hymns along with various other works, such as a St. Matthew Passion, as well as writings on music.  Born as Melchior Fuchs, he Latinized his family name to distinguish himself in church composition.